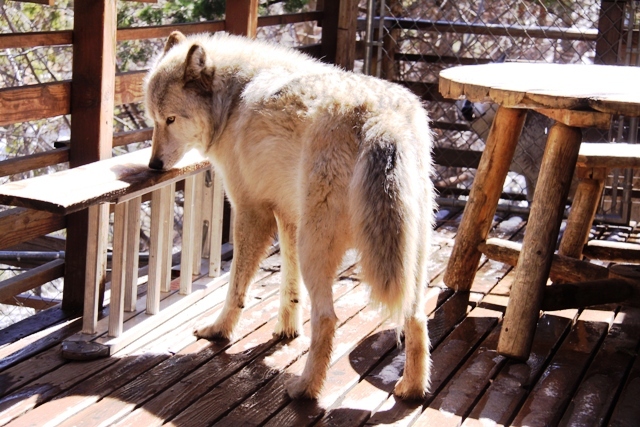 Wolves don’t need a full moon to speak their mind!

Way down at the end of Spring Valley Road, the Wolf Sanctuary in Northern Colorado exist to be the final home for wolves to live out their lives in peace.  Timber wolves, Grey wolves, Arctic wolves, Mackenzie Valley wolves and most other types of North American wolves and wolf hybrid animals are represented at the sanctuary at some point.

These wolves come from Canada, Alaska, and other U.S. states where, for whatever reason, the animal was abused, discarded, injured, or found to be at the mercy of the civilian world, and removed from their natural habitat. Unscrupulous animal breeders will sell wolf and wolf hybrid puppies to people with the romantic notion that they can tame a wild animal. It doesn’t take long before a would-be wolf owner realizes they cannot domesticate a wolf, and their expectations of having a beautiful pet give way to inconvenience and neglect.

There’s no end to the profile stories of abuse, arrogance, and inhumane conditions many of these wolves come from. The good news is that some wolves and wolf hybrid animals find refuge and new homes at facilities like the Wolf Sanctuary out of Bellvue, Colorado. These sanctuaries work with each other to place orphaned wolves and support each other in their respective operations.

The Wolf Sanctuary has roots going back to the mid 1990’s when  the original founders, Frank and Patricia Wendland witnessed how an acquaintance who owned three wolves  went from a “look what I’ve got,” mentality to a neglectful human being who couldn’t be bothered with caring for a wild animal. When one of the three wolves was found dead from dehydration (no water), the Wendland’s stepped in and made the commitment to care for the surviving two wolves. Since those early days as caregivers to orphaned wolves and wolf-dog crosses, Frank Wendland has devoted his life to providing homes for as many as 30 wolves at a time. But each wolf that is fortunate enough to find refuge at Wolf Sanctuary, the animal has a home for the remainder of its life.

At the Wolf Sanctuary, no animals are bred, sold, traded, loaned out, leased, or otherwise compromised further. Once a wolf or wolf-dog is located at the Wolf Sanctuary they begin the journey of being respected and cared for in terms of their physical and medical needs as well as their social and emotional well being.

Most folks don’t realize how social and amiable wolves are by their nature.  When a wolf comes to the sanctuary for the first time, the folks who work with the animals begin the process of socialization and establishing trust over a period of time. Food, toys, shelter, and medical care are provided for the sanctuary wolves through generous public donations, volunteer workers, and veterinarians who have knowledge and interest in providing for the health and well-being of each and every wolf.

Some individual wolves come from difficult circumstances such being kept in a plastic animal carrier for much of their lives. This confinement traumatizes the wolf, a creature designed to move and cover large tracts of territory. Other wolves have been tethered to a chain staked into the ground, with no freedom of movement nor care, nor social interaction with other wolves, just chained to the ground and put on display for tourist dollars in some obscure way point along a backcountry road.

The stories where these wolves come from are endless. And the Wolf Sanctuary has been in existence for many generations of individual wolves to have lived out their natural lives in peace, with their stories of rescue and the even more fascinating accounts of how each wolf did heal enough to exhibit contentment and joy; to get back as close of an existence as they might have experienced if they had not endured the gauntlet and mistreatment at the peril of human hands.

It is only fair to take note that even though these wild animals where abused and neglected by ignorant human beings, it is also the story of more enlightened human beings that have taken on the mantle of care takers, guardians, and compassionate advocates to do something right by these wolves and wolf-dogs who live out their lives at the Wolf Sanctuary.

Every wolf that comes to the Wolf Sanctuary has a name.  They have names like Sasha, Thor, Spirit, Webster, Loki, and Oden — Such cool names, such cool personalities, all unique.  It can take a while for individual wolves to come around and let their individuality shine. But eventually, with love and patience by their caretakers, most of these creatures pick out their favorite toys to play with. Wolves are matched with a den partner they get along with, and they take on new lives that offer them room to roam, howl, talk, yap, and communicate with their brethren and sister pack mates.

If we could only understand what their talking about, we might gain some wisdom. During the winter and spring of 2012, my home was a large, handsome, log house perched on top of a canyon rim. Not a day or evening went by without the chorus of barks, howls, mournful wails, and joyful yipping coming from the canyon bottom where these wolves reside at the Wolf Sanctuary west of Ft. Collins, CO.

Wolves don’t require a full moon to talk. That’s a myth. Wolves communicate whenever they darn well feel like it, any time of day, noon, or night. Wolves have their own reasons for talking to each other. Often times an individual would pop off with a series of barks and whoops. Then, somewhere down the line, another would reply with an equally complex answer. The impression is one of an ancient language;  a language understood by similar souls that trace their wilderness blood line back to before mankind came along.

You can learn so much more about the sanctuary-end of the wolf debate by going to wolfsanctuary.net. Even if you are thousands of miles away, you can contribute and learn the good things about wolves. The sanctuary knows how to make a donated dollar stretch, and since the Wolf Sanctuary was largely spared from the destruction of the High Park fire that lit up the nights of June 2012, one of the biggest needs of the Wolf Sanctuary is to continue and complete the construction of fire dens (cinder block houses) for the wolves to ride out a potential timber fire in the future where there is not enough time to evacuate as they were able to do on June 9th.

What is just as much of a pleasure as visiting these wolves at the sanctuary itself, is the quality of writing and expression shared by the Wolf Sanctuary staff and volunteers who share their experiences and fascinating interactions of individual wolves who have let them into the lives of an ancient creature; one that mankind fears and admires at the same time.  You can get on the “Cry Wolf” newsletter mailing list and begin the journey of enlightening your own knowledge of wolves from a different perspective than you might have never considered before.