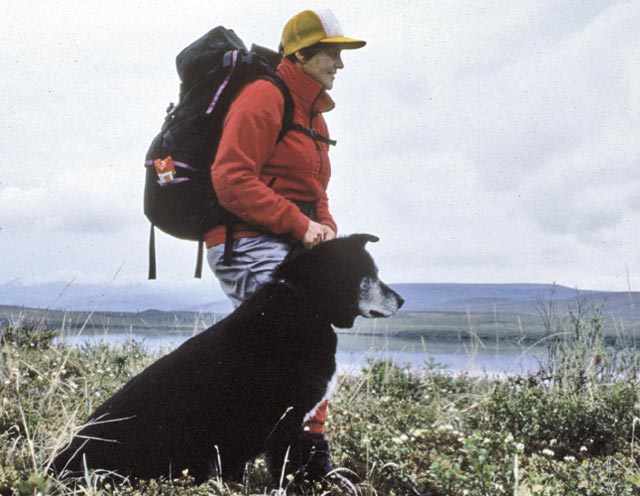 We all fancy ourselves, at some point in our lives, to be adventurous. And few of us can keep a straight face when there is a puppy in the room. Even the most sober among us cannot remain stoic in the presence a dog, any age, who knows how to make you laugh. Well, here’s a story about dogs, wolves, and people in author Helen Thayer’s book, Three Among Wolves. It is a must read for any level-headed human being who wants to know the real story about the wolf, and their place in the health of North America’s wildlife, and importance to any region within the wolf’s natural range.

“After our year long experience living with wolves we are convinced that wolves must be allowed to exist in their natural state. They are a major reason for the overall health of prey (and game) species as they cull the weak, sick, and old,” said Helen Thayer.

Helen, her husband Bill, and her Canadian Eskimo Husky named Charlie are the “Three Among Wolves,” a true story articulating the adventure and wonder of observing wolf behavior in a setting of the wolf’s choice. These three lived with timber and arctic wolves in Canada’s Yukon Territory (above the Arctic Circle) and the Mackenzie Delta. This adventure was long enough to experience for themselves an animal society so advanced in their family structures, that modern humans could learn lots about parenting and getting along with their neighbors.

And guess what the catalyst was, the diplomatic emissary to make proper introductions between the wolves and humans in this story? It was Charlie, an enormous black Eskimo Husky who was born on an ice flow, chewed ice for water, and trained by an Inuit polar bear hunter to be the early warning alarm for approaching polar bears. It is Charlie, a fur-bearing, four-legged canine that author Jack London would have been honored to write about this creature alongside of “White Fang” and “Call of the Wild.”

While we’re at it, let’s write a book about Charlie! Below is the pivotal role Charlie performed as liaison between mankind and the wolves the Thayers’ studied:

“Following Charlie’s lead the Thayers’ discover the complexities of wolf family structure, including the alpha male and female, care of the pups, hunting and survival skills. This book is both a natural history of wolves and adventure tale. Far from being the viscous killers of popular imagining, the Thayer’s found that wolves form loving family bonds in a world that offers them neither safety nor understanding.” From: Three Among Wolves.

You can order Three Among Wolves by going to Helen Thayer’s website at: www.helenthayer.com

One thought on “Three Among Wolves”