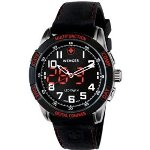 We had the opportunity to evaluate the Nomad LED Compass watch by Wenger. From the information we first received, it was apparent this Swiss Army watch has the styling to wear with a suit and tie, yet be durable enough to wear year-round during any outdoor activity.

The Nomad Compass watch is Swiss made and uses both digital and analog technology in this multi-function timepiece.  Both the watch crown and casing are milled from high-quality stainless steel for durability. The brushed finish also lends an appealing aesthetic value to the Nomad. In addition to the sense of reliability and accuracy that Swiss watches are known for, the one feature of the Nomad Compass watch we really valued is the use of a hardened mineral crystal from which all the watch functions are observed. A hardened mineral crystal ensures the watch owner that this timepiece has the best protection from scratches and dings that can often ruin a good outdoor watch long before its time.

All of the watch functions are readily identified in Swiss Army red around the circumference of the outer watch bezel. The inner watch bezel (under the crystal) features white incremental markings for the second hand. In general, the color combinations of red, white, black and brushed stainless steel give this watch a subtly handsome appearance.

Setting up the Nomad Compass watch was straight forward and easy to accomplish. It’s important to bear in mind that both the analog seconds hand and the digital seconds counter need to be synchronized or the digital time function can be thrown off. Setting digital time, day and calendar are simply a matter of following instructions and takes only a few minutes.

Calibrating the Nomad compass function takes just a little more thought and preparation, but is still easy to accomplish. Your direction of travel will be the red and white Swiss Army cross logo at the 12 o’clock position on the watch face. With the watch off the wrist and laying flat on an even surface, the first step to calibrating the compass is to hold down the Compass button until “CAL” is displayed in red digital letters. Then you will rotate the watch twice, to finish the first step of the calibration. While the indicators are still moving, you press the Compass button again to input the magnetic declination angle. If you want your compass to give you accurate readings, you’ll determine what the magnetic declination angle is before you calibrate the compass.

Most all digital compass watches using the latest technology are calibrated in a similar manner of rotating twice and locking in data. Like most current electric and digital devices such as cell phones and I-pods require some set-up before using, the Nomad Compass watch set up fairly quick. The instructions are concise, and once accomplished, don’t have to be repeated unless you move to a different geographical region.

The Nomad Compass was referenced against two analog compasses that point to magnetic north. At each compass heading, the Nomad matched the analog compasses very closely, allowing you to get to your destination with confidence.  Any variance between compass headings would most likely give the Nomad compass reading the greater accuracy due to the automatic compensation of the magnetic declination angle being accounted for.

Unlike an analog compass that is inscribed with the compass angles, using the Nomad Compass watch requires you to understand these angles and be familiar enough to determine if you are heading northwest, southeast, etc. This is not a big deal and just by orienting yourself with the general compass headings you will have a quick reference to keep you on track. The general compass pointes and associated angles are: North (360º or 0º); East (90º); South (180º) and West (270º). So when you key the compass button on the Nomad and it reads 290º, you will quickly see you are heading in a north-west direction. It takes some self-training, but so does compass orienteering in general.

Overall, we think the Wenger Nomad Compass watch is a solid timepiece with accurate direction finding capability. Wearing the watch day-to-day offered several chances to check the compass heading on trail hikes and in getting one’s bearings while following directions through an unfamiliar city. We found the features of this multi-function watch to be fairly practical with the Date and Day functions. As most of us have experienced, at some point in an exhausting work week, traveling cross-country and in and out of airports and hotels, it’s easy to lose track of what day it is. With the Nomad, you just press the day button to see that it’s Friday, and you’re almost home.

Not everybody cares about whether or not the analog watch hands are visible in the black of night. Yet, the one thing a Swiss Army watch is known for, besides being an accurate timepiece, is illuminated numbers, hour hand and minute hand. At night, the numbers are clearly visible on the Nomad, but the hour and minute hands are not. It’s a downside that is certainly mitigated just by pressing the Time button for a digital reading, but this requires you to reach over with your other hand to press the nightlight on the watch. It would be great if the hour and minute hands were overlaid with the same Super Luminova® as the numerals on the watch face are. This would give the Nomad even more utility.