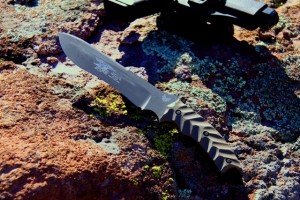 Benchmade Knife Company won the 2009 Manufacturer of the Year award for its lean manufacturing and management approach, initiating Green processes, and achieving steady growth. The honor is a regional recognition in the Medium Sized Company category bestowed on the Benchmade team by The Portland Business Journal (PBJ).

The PBJ presented its 2009 Manufacturer of the Year award at The Oregon Manufacturing Awards Luncheon that took place on Thursday, October 29th at the Portland Art Museum in downtown Portland, Oregon.

“It is an honor to be presented with such a prestigious award within the Oregon community” says Les de Asis, Founder and Owner of Benchmade Knife Company. “We are thrilled to be recognized as a leading manufacturer because of our dedication to providing U.S.-based jobs and commitment to customer satisfaction.”

The award for Manufacturer of the Year is based on company performance, overall business strategy, and innovative approaches to internal operations, manufacturing processes, and sustainable practices involving customers, partners and suppliers.

Benchmade is long known to be a leader in innovation, design, and engineering excellence in creating the highest quality cutting tools they can produce. Whether the purpose of a Benchmade knife is created for the medical field, the military, outdoorsmen, hunters, or hikers, each knife, and every conceivable design is created and manufactured in the United States of America.

In July, Benchmade won the 2009 Knife of the Year Award bestowed by The Shooting Academy For Excellence for the 585 Mini-Barrage folding knife. As it turns out, 2009 has been a good year for recognition of Benchmade, not only for forward thinking management practices and environmental awareness, but also for the quality of the product. If it all stopped there, Benchmade has good reason to celebrate as we wrap up 2009.

Some Benchmade knives, like the 9051 SBK Auto-Folder knife we reviewed a while back in FreshAirJunkie.com are only available to active military soldiers. One of the most beautiful and functional Benchmade knives was created to honor Marc A. Lee — the first Navy Seal to lose his life in Iraq since the war started in 2003. Lee was KIA on August 2, 2006. Marc graduated with BUDS/S Class 251, and this Navy Seal inspired the Marc Lee “Glory Knife,” designed by Eddie Killian. We’ll have more down the road on the Marc Lee 150 BKSN, a commemorative, combat ready, and a tactical knife used today by U.S. soldiers. Yet, we want to congratulate Benchmade Knife Company and all the hard work they give back to the community they operate in, whether it is recognized or not.